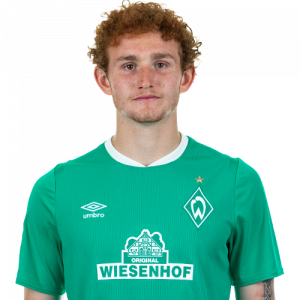 Joshua Thomas Sargent (born February 20, 2000) is an American professional soccer player who plays as a forward for Bundesliga club Werder Bremen and the United States national team. In May 2017, at the age of 17, he became the youngest U.S. player to score at the FIFA U-20 World Cup.

Early career
Sargent played for Scott Gallagher Missouri, a U.S. Soccer Development Academy club from St. Louis, Missouri. After his impressive performance at the 2016 Nike International Friendlies, he spent two weeks training with Sporting Kansas City in the summer of 2016 and the MLS club acquired the player’s acquisition rights, as St. Louis is in Sporting Kansas City’s homegrown player territory. In October of the same year, Sargent spent a week-long training spell with Dutch club PSV Eindhoven. In January 2017, after being called for the United States U20 team, he trained with German club FC Schalke 04.

Werder Bremen
On September 20, 2017, Werder Bremen announced that Sargent would join the club on January 1, 2018, and then sign a professional contract on his 18th birthday, per FIFA rules. He played with the club’s under-23 squad in a friendly match and signed his contract on February 20, 2018, making him eligible to join the first team for the 2018–19 season.

On December 7, 2018, Sargent made his debut for the Werder Bremen first team, coming on as a substitute in the 76th minute in a match against Fortuna Düsseldorf. He scored with his first touch of the match in the 78th minute, the fastest goal by a debutant in club history.

In February 2019, Sargent agreed to a “long-term” contract extension with the club.