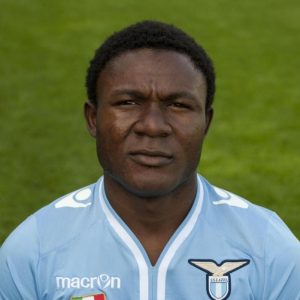 Joseph-Marie Minala (born 24 August 1996) is a Cameroonian professional footballer who plays as a midfielder for Italian club Lazio.

Early career
Minala began playing for amateur club Vigor Perconti and attracted the attention of Napoli, who gave him a two-month trial. He was spotted by Lazio scouts in 2013, while representing the region of Lazio in the Trofeo delle Regioni. He joined Lazio in the summer of 2013.

In early 2014, Minala then made news when his age was publicly disputed by multiple parties. Both Lazio and the player denied the claims. In May 2014, the Italian FA completed their investigation into the claims, confirming the accuracy of his given age and announcing that no disciplinary action would be taken against him or Lazio.

Lazio
Minala broke into Lazio’s senior team on 16 March 2014, when he was an unused substitute in the match against Cagliari. He then made his full Serie A debut on 6 April 2014, replacing Senad Lulić for the last 13 minutes of a 2–0 home win against Sampdoria.

On 25 August 2014 it was announced that Minala would join on loan Serie B side Bari for the 2014–15 season. On 13 December 2014, as a 73rd-minute substitute for Marco Augusto Romizi, he scored his first career goal, the last-minute decider in an away victory over Cittadella. He scored two more goals, and was also sent off twice.

On 6 July 2015, Minala was again loaned to a Serie B team, Latina. He made his debut on 9 August 2015, starting in a 4–1 home defeat to Lega Pro team Pavia in the first round of the Coppa Italia. He scored his first goal for the team on 27 October 2015, equalising in a 2–1 loss to Ternana at the Stadio Domenico Francioni. In January 2016, he rejoined Bari.

On 21 January 2017, Minala joined Serie B side Salernitana on loan with an option to buy. On 16 January 2019, he returned to the same club on loan for the rest of the season.