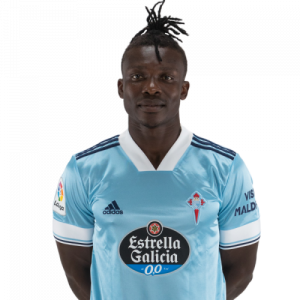 Joseph Aidoo (born 29 September 1995) is a Ghanaian professional footballer who plays as a centre-back for Spanish club RC Celta de Vigo and the Ghana national team.

Inter Allies
He started his professional football career at Inter Allies in the First Capital Plus Premier League. In 2013–14, Aidoo was nominated in the category “Defender of the year” in the Ghana Premier League, but eventually missed out on the award. Aidoo was the club captain during the season of 2014–15.

Celta
On 11 July 2019, Aidoo agreed to a five-year contract with Spanish La Liga side RC Celta de Vigo for a reported fee of €8 million. His former club Hammarby received €380,000 as part of the deal.

He made his debut for the Galician club on 24 August 2019 in a 1-0 home win against Valencia, starting and playing 90 minutes at center-back.