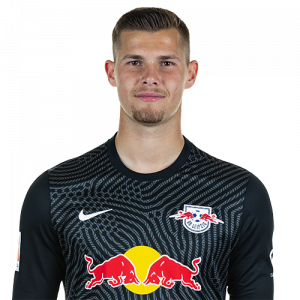 Josep Martínez Riera (born 27 May 1998) is a Spanish footballer who plays for RB Leipzig as a goalkeeper.

Las Palmas
Born in Alzira, Valencia, Martínez joined FC Barcelona’s La Masia in July 2015, from hometown’s UD Alzira. On 19 July 2017, after finishing his formation, he signed for UD Las Palmas and was assigned to the reserves in Segunda División B.

Martínez made his senior debut on 20 August 2017, starting in a 1–1 home draw against UD Melilla. He finished the campaign as a starter, as his side avoided relegation.

Martínez made his first team debut on 28 April 2019, playing the full 90 minutes of a 4–1 home routing of CD Lugo for the Segunda División championship. On 17 June, he was definitely promoted to the main squad.

RB Leipzig
On 22 January 2020, RB Leipzig reached an agreement with Las Palmas for the transfer of Martínez, effective as of 1 July. He agreed to a contract until 2024 with his new club.