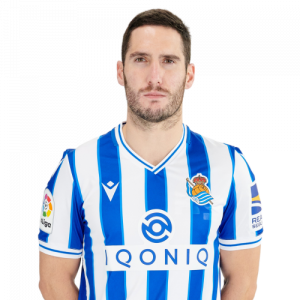 Joseba Zaldúa Bengoetxea (born 24 June 1992) is a Spanish professional footballer who plays for Real Sociedad as a right back.

Born in San Sebastián, Gipuzkoa, Zaldúa played his youth football with local Real Sociedad. He made his senior debut with the reserves, spending several seasons in Segunda División B with them.

Zaldúa appeared in his first official match with the main squad on 23 November 2013, featuring the first 80 minutes before being substituted for Javier Ros in a 4–3 La Liga home win against RC Celta de Vigo. Roughly a month later, he signed a new deal with the Basques until 2016.

On 20 May 2014, Zaldúa renewed his contract with the Txuri-urdin until 2018, and was definitely promoted to the first team. On 4 July 2017, he was loaned to fellow top-flight club CD Leganés for one year. He made 30 appearances as the side from the outskirts of Madrid avoided relegation, and scored a last-minute equaliser in a 2–2 draw at Deportivo Alavés on 21 January 2018. On 7 May, he was sent off in a 0–3 home loss to Levante UD for denying José Luis Morales a goalscoring opportunity.

Zaldúa scored his first goal for Real Sociedad on 12 May 2019 in a 3–1 victory over Real Madrid at Anoeta Stadium, but was replaced in the same game with a broken left leg.