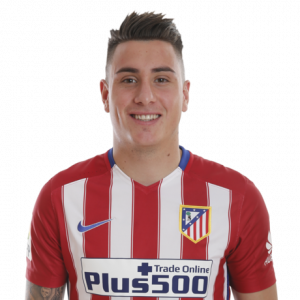 After starting out his professional career with his Danubio FC, Giménez moved to Spain, signing for Atlético Madrid ahead of the 2013–14 season.A solid, powerful and fast moving defender, Giménez settled quickly with the club, winning four major titles with the latter, including the La Liga title in his debut season.

At international level, Giménez made his Uruguay debut in 2013, and has since represented the nation at two FIFA World Cups and three editions of the Copa América.

Giménez scored his first goal for the club on 6 December 2014, opening a 2–0 win away to Elche CF to move Atlético into second place. He also scored a header against their biggest rival Real Madrid in Atlético’s 2–0 win in the Copa del Rey in January 2015.

On 20 February 2019, Giménez scored the opener in 2-0 home win against Italian champions Juventus to give Atlético the advantage in the first leg of the Round of 16 fixture in the UEFA Champions League.

Ahead of the 2019–20 season, Giménez was made third captain of the team, behind Koke and Jan Oblak.