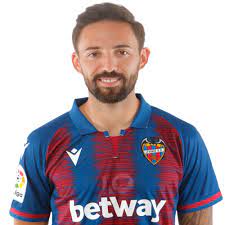 José Luis Morales Nogales (born 23 July 1987) is a Spanish professional footballer who plays for and captains Levante UD as a left winger.

Born in Madrid, Morales only played amateur football well into his 20s. At “10 or 11 years of age”, he had unsuccessful trials with Real Madrid. On 1 July 2011 he signed a contract with Levante UD, being assigned to the B team in Tercera División and promoting in his first season, with the player contributing 14 goals in 41 matches.

On 17 April 2013, Morales agreed to a new two-year deal with Levante, and was promoted to the main squad. On 30 July, he was loaned to SD Eibar of Segunda División.

Morales made his La Liga debut on 30 August 2014, starting in a 0–3 away loss to Athletic Bilbao. He scored his first goal in the competition on 4 October, helping to a 3–3 draw at former club Eibar.