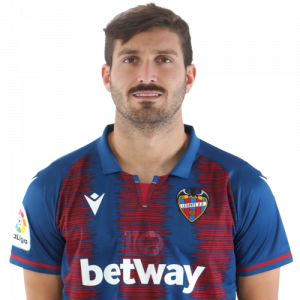 José Ángel Gómez Campaña (born 31 May 1993) is a Spanish professional footballer who plays for Levante UD as a midfielder.

Formed at Sevilla, for whom he appeared in 24 competitive matches, he went on to represent mainly Levante after signing in 2016. He also played for clubs in England, Germany and Portugal.

Campaña won two European Under-19 Championships with Spain. He made his senior debut in 2020.

Levante
On 11 August 2016, Campaña agreed to a four-year contract with Levante UD, recently relegated to the second tier. He played regularly in his first season, as the club from Valencia won promotion as champions.