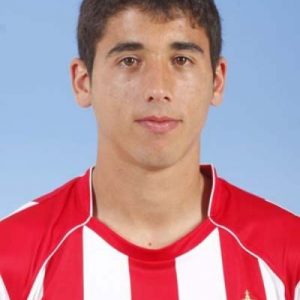 José Ángel Valdés Díaz (born 5 September 1989), known as José Ángel or Cote, is a Spanish professional footballer who plays for SD Eibar as a left back.

Sporting
Born in Gijón, Asturias, José Ángel was a product of hometown Sporting de Gijón’s prolific youth system, Mareo. He made his first-team and La Liga debut on 8 February 2009, in a 1–3 away loss against FC Barcelona. He went on to feature regularly for the duration of the season as the side narrowly avoided a drop, adding a goal in a 3–2 home win over Deportivo de La Coruña.

In 2009–10, José Ángel again played 13 games for the first team as they retained once again their top-division status (15th position). In the following campaigns, he continued battling for position with another club youth graduate, Roberto Canella, with both players appearing in roughly the same number of matches.

Roma
On 19 July 2011, Serie A club A.S. Roma reached an agreement with Sporting Gijón for the transfer of José Ángel, joining compatriot Luis Enrique who had just been appointed team manager.The former paid €4.5 million for his services, plus bonuses. He made his competitive debut on 11 September, being sent off in a 1–2 home loss against Cagliari Calcio.

José Ángel spent the 2012–13 and 2013–14 seasons on loan to Real Sociedad, mainly acting as backup to Alberto de la Bella during his spell.

Porto
In July 2014, José Ángel joined FC Porto for free, with Roma being eligible to receive 50% of any future transfer fee. He appeared in 28 competitive games during his two-year spell in Portugal, his Primeira Liga debut arriving on 31 August 2014 in a 3–0 home defeat of Moreirense FC (90 minutes played).

Eibar
On 14 July 2017, José Ángel signed a three-year contract with SD Eibar as a free agent.