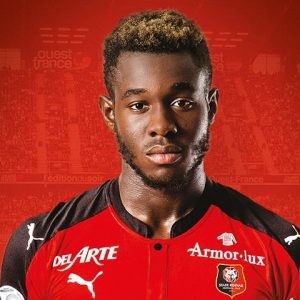 Joris Gnagnon (born 13 January 1997) is a French professional footballer who plays as a defender for La Liga club Sevilla.

Rennes
Born in Bondy next to Paris, Gnagnon is a youth exponent from Stade Rennais. He made his Ligue 1 debut on 16 January 2016 against Troyes AC, playing the entire second half. He scored his first Ligue 1 goal on 28 January 2017, in a Derby Breton against Nantes to draw the game in the 86th minute.

Sevilla
On 25 July 2018, Gnagnon joined Spanish side Sevilla FC for five years. Gnagnon came under criticism in July 2019 after aggressively kicking Liverpool player Yasser Larouci in a pre-season friendly in Boston, causing the 18 year old to leave the pitch on a stretcher and Gnagnon to be given a red card.

Return to Rennes (loan)
On 26 August 2019, Gnagnon returned to Rennes on a one year loan deal.