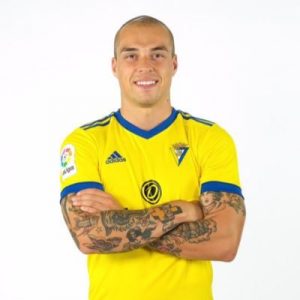 Jorge Marcos Pombo Escobar (born 22 February 1994) is a Spanish footballer who plays for Cádiz CF as an attacking midfielder.

Born in Zaragoza, Pombo played youth football with local clubs Real Zaragoza and UD Amistad. He made his senior debut with the former’s reserves on 6 October 2013, coming on as a substitute in a 2–0 Tercera División away win against CD Oliver.

On 17 May 2015, Pombo suffered a serious knee injury during a 2–8 Segunda División B heavy loss against Valencia CF Mestalla, being sidelined for seven months. After recovering, he continued to appear with the B-team regularly.

Pombo made his professional debut on 7 September 2016, starting in a 1–2 home loss against Real Valladolid, for the season’s Copa del Rey. Thirteen days later he made his Segunda División debut, coming on as a substitute for Álex Barrera in a 0–0 away draw against Gimnàstic de Tarragona.

Pombo scored his first professional goal on 26 March 2017, netting the second in a 3–0 away win against Elche CF. On 5 April he renewed his contract until 2020, and after becoming a regular starter under César Láinez, he was definitely promoted to the main squad on 6 June.

On 2 January 2020, Pombo moved to fellow second division side Cádiz CF on loan for the remainder of the campaign. On 22 July, after achieving promotion, the club exercised the obligatory buyout clause and signed him permanently until 2023.

In September 2020 Pombo scored his first goal in La Liga in the 2:0 win over SD Huesca.