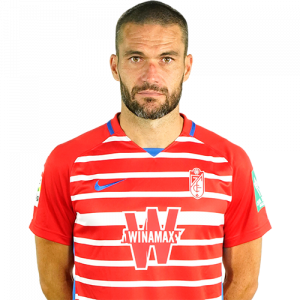 Jorge Molina Vidal (born 22 April 1982) is a Spanish professional footballer who plays as a centre forward for Granada CF.

A late bloomer, he began to play professional football at 25 with Poli Ejido. He represented mainly Betis during his career, achieving two promotions to La Liga and scoring 77 goals in 213 matches across all competitions in the process. In the Spanish top division, he also represented Getafe and Granada.

Getafe
On 24 June 2016, the 34-year-old Molina signed a two-year contract with Getafe CF on a free transfer. He scored 20 goals in his first year, ranking fourth in the individual charts to help his team return to the top flight.

On 31 August 2019, Molina scored in a 1–1 draw against Deportivo Alavés at the age of 37 years and 131 days, becoming the club’s oldest player to achieve the feat in La Liga.

Granada
Molina agreed to a two-year deal with Granada CF on 25 August 2020. The following 29 April, he scored a header after coming on as a substitute against Barcelona, putting his team 2–1 ahead for their first ever win at the Camp Nou.