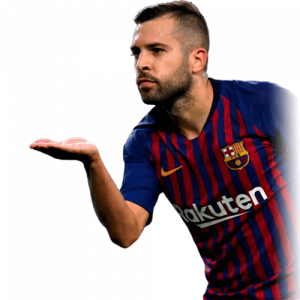 Jordi Alba Ramos (born 21 March 1989) is a Spanish professional footballer who plays as a left-back for Barcelona and the Spain national team.

Alba started his career at Barcelona, but was released after being deemed too small. After joining Cornellà, he moved to Valencia. In 2012 he returned to Barcelona, with whom he has won sixteen major honours, including five La Liga titles, five Copas del Rey and one UEFA Champions League.

On 22 June 2012, Alba signed a five-year contract with Barcelona for a transfer fee of €14 million. He made his official debut on 19 August, playing the full 90 minutes in a 5–1 home win against Real Sociedad.

Alba scored his first goal for the Blaugrana on 20 October 2012, the opener in a 5–4 win at Deportivo La Coruña, and scoring an own goal. In the following game, at home against Celtic in the Champions League group stage, he found the net in the 93rd minute of a 2–1 win.

On 12 March 2013, Alba scored his fifth goal of the campaign, scoring in the last minute to complete Barcelona’s 4–0 home win over A.C. Milan in the Champions League round of 16 after a 0–2 first leg defeat at the San Siro, when his team became the first in the competition’s history to overturn such a deficit. He ended his first season at Barcelona as league champion, as Tito Vilanova’s side regained the title from Real Madrid.

On 2 June 2015, Alba agreed to a new five-year contract with a new buyout clause of €150 million. Four days later, he started in the Champions League final, helping the club to its fifth win in the competition by beating Juventus 3-1 at Berlin’s Olympiastadion. He made 38 appearances in all competitions, with one goal, as Barça won a treble.

On 22 May 2016, Alba won the second Copa del Rey of his career, scoring in the 97th minute of the final against Sevilla after a through pass from Lionel Messi, in an eventual 2–0 extra time win at the Vicente Calderón in Madrid.

On 3 February 2021, Alba headed in a 92nd minute equalizer and later scored the final goal with a stunning volley in extra-time, both assisted by Antoine Griezmann, in a 5–3 victory over Granada in the 2020-21 Copa del Rey quarter finals away at the Los Cármenes.