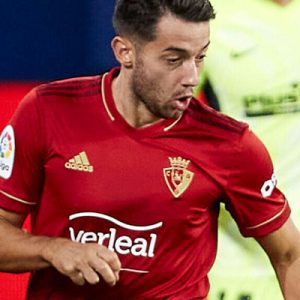 Jonathan Rodríguez Menéndez, commonly known as Jony, is a Spanish professional footballer who plays as a left winger for Osasuna.

Early years
Born in Cangas del Narcea, Asturias, Jony finished his youth career with FC Barcelona after a period with local Real Oviedo. He made his senior debut with the latter’s reserves in the 2010–11 season, in Tercera División.

In June 2011, Jony moved to Segunda División B club Marino de Luanco. He continued competing in that level in the following years, representing Getafe CF B, Real Avilés and Sporting de Gijón B.

Sporting
Jony signed a two-year deal with the latter’s first team on 7 May 2014, being definitely promoted. He played his first match as a professional three days later, starting and scoring the first goal in a 2–1 home win against Hércules CF for the Segunda División championship.

During the 2014–15 campaign, Jony contributed seven goals in 41 appearances, being an undisputed starter as the Rojiblancos returned to La Liga after a three-year absence. He made his debut in the competition on 23 August 2015, starting in a 0–0 home draw against Real Madrid.

Jony scored his first goal in the Spanish top flight on 23 September, but in a 1–2 loss at Rayo Vallecano.

Málaga
On 23 June 2016, Jony signed a four-year contract with fellow league club Málaga CF after his contract with Sporting expired. On 12 January 2018, he returned to Sporting on loan until the end of the second level season; in April, he was named Player of the Month for the previous month.

On 17 June 2018, following Málaga’s top-flight relegation, Jony was loaned to Deportivo Alavés of the same tier for one year.

Lazio
Jony joined S.S. Lazio on 22 July 2019. His maiden Serie A appearance took place on 1 September, when he came on as a 78th-minute substitute in the 1–1 home draw with A.S. Roma.