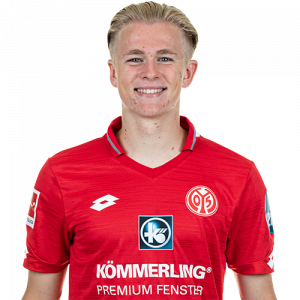 Jonathan Michael Burkardt (born 11 July 2000) is a German footballer who plays as a forward for Bundesliga club Mainz 05.

Burkardt came from Darmstadt 98 to the Mainz 05 youth performance center in 2014 and was active in the B-Youth and A-Youth Bundesliga for the Mainz team. In June 2018, the 17-year-old striker received a professional contract that will initially run until 2020. He took part in the professionals’ summer training camp and finally made his debut in the Bundesliga on September 15, 2018 in a 2-1 win in the 05er home game against FC Augsburg. At the end of the season he had played four Bundesliga games; he had also played twice for the Mainz team in the Regionalliga Südwest. Until the end of the 2018/19 season he was still eligible to play for the Mainz youth team and was also used there. In the 2020/21 season he will be used regularly in the Bundesliga.