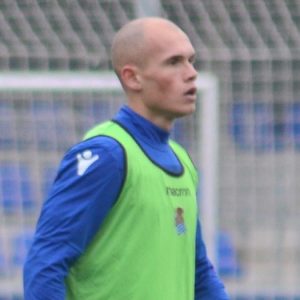 Born in Azpeitia, Gipuzkoa, Basque Country, Guridi was a Real Sociedad youth graduate. On 11 July 2014 he was promoted to the reserve team in Segunda División B, and made his senior debut on 13 September by starting in a 3–2 away loss against Sestao River.

Guridi scored his first professional goal on 10 October 2015, netting a last-minute equalizer in a 1–1 home draw against the same opponent. The following 10 February, he renewed his contract until 2018.

Guridi made his first team – and La Liga – debut on 18 March 2017, starting in a 1–0 away loss against local rivals Deportivo Alavés. Ahead of the 2017–18 season, he was definitely promoted to the main squad.

Returning to the B-side in 2018–19, Guridi was loaned to fellow third division side CD Mirandés on 30 January 2019. On 19 July, after achieving promotion to Segunda División, his loan was extended for one year.

Guridi scored his first professional goal on 3 November 2019, netting his team’s first in a 4–2 loss at Elche CF, and was a regular starter as Mirandés avoided relegation.