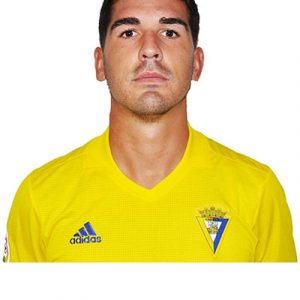 Jon Ander Garrido Moracia (born 9 October 1989) is a Spanish footballer who plays for Cádiz CF as a defensive midfielder.

Born in Bilbao, Biscay, Garrido made his senior debut for CD Getxo in 2008, in the regional levels. In the 2010 summer he moved straight to Segunda División B, signing for Barakaldo CF.

On 21 January 2014, Garrido was transferred to La Liga side Granada CF, being subsequently loaned to Cádiz CF also in the third level.

On 6 July 2014, Garrido’s loan was extended for a further year. On 29 July of the following year, he signed a permanent two-year deal with the Yellow Submarine.

On 22 January 2016, Garrido was loaned to fellow third division club Racing de Ferrol, until June. He returned to Cádiz after his loan expired, and made his professional debut on 19 August by starting in a 1–1 away draw against UD Almería.

On 28 July 2018, after becoming an undisputed starter under Álvaro Cervera, Garrido renewed his contract until 2020. On October 30, 2019 he prolonged his contract with the Andalusian club until June 30, 2023.