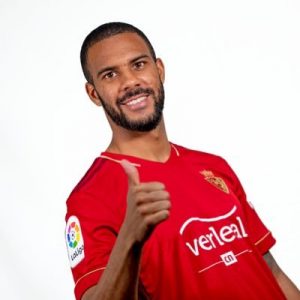 Jonás Ramalho Chimeno (born 10 June 1993) is a professional footballer who plays as a central defender for CA Osasuna, on loan from Girona FC, and the Angola national team.

In 2011, he was the first mixed-race player to appear for Athletic Bilbao – who only field Basque players – in an official competition. During his career, he represented mainly that club and Girona.

Born in Spain, Ramalho made his debut for Angola in 2020.

In 2013, Ramalho was loaned to Girona FC, playing regularly in two Segunda División seasons. In May 2015, shortly after suffering a serious knee injury away to Deportivo Alavés, he signed a new contract to keep him at Athletic for the upcoming campaign.

On 7 June 2016, after suffering relegation with the B side, Ramalho was released by Athletic Bilbao. He returned to Girona late in the month, now in a permanent deal.

Ramalho left the Catalan club after its relegation in 2019, but returned to on 20 August of that year after agreeing to a three-year contract. He returned to the top division on 1 February 2021, loaned to CA Osasuna until 30 June with a buying option.