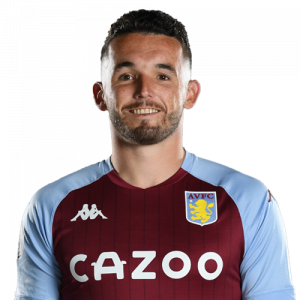 John McGinn (born 18 October 1994) is a Scottish professional footballer who plays as a midfielder for Premier League club Aston Villa and the Scotland national team. McGinn previously played for St Mirren and Hibernian, and also represented Scotland at the under-19 and under-21 levels. He made his full international debut in March 2016.

McGinn signed a four-year contract with Aston Villa on 8 August 2018 despite interest from Celtic. He made his debut for Villa in a 3–2 win against Wigan Athletic on 11 August, during which he provided an assist for the opening goal and his inswinging corner forced an own goal in the second half. McGinn scored his first goal in English football on 22 September, a swerving 25-yard volley in a 2–1 home defeat against Sheffield Wednesday which was later named EFL Championship goal of the season.

Despite consistent performances at his new club, which saw McGinn quickly become a new fan favourite, Villa began the season poorly, which eventually lead to the sacking of Steve Bruce as manager of the club in October 2018. Brentford manager Dean Smith was appointed as the new manager, and McGinn continued to be a key player in the Villa starting 11 for the new manager. The midfielder picked up his first goal under the new manager in a 3–0 win against Derby County and then picked up his first brace for the club in a 3–1 win over Nottingham Forest in March 2019. McGinn’s good form continued, scoring goals against Middlesbrough and Sheffield Wednesday as Villa’s form picked up heading into the final stages of the season. After picking up the club’s Players’ Player of the Season and Supporters’ Player of the Season awards, McGinn scored the winner in the Championship Playoff Final to promote Aston Villa to the Premier League after 3 years in the Championship.

On 8 August 2019, McGinn signed a five-year contract with the club. He scored the first goal of Aston Villa’s return to the Premier League in the first game of the season, in a 3–1 away defeat to Tottenham Hotspur on 10 August 2019. On 21 December 2019, McGinn suffered a fractured ankle in a 3–1 home defeat to Southampton and was expected to be out for up to three months. The break in the season, due to the COVID-19 pandemic in the United Kingdom meant that McGinn could return the same season, and he featured in all Villa’s remaining games as they achieved Premier League survival.

On 11 December 2020, John McGinn signed a new five-year contract at Aston Villa, which sees him extend his stay until 2025.