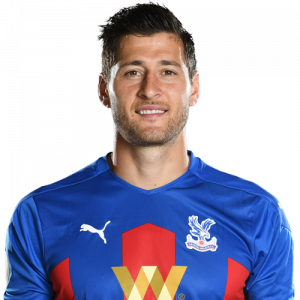 Joel Edward Philip Ward (born 29 October 1989) is an English professional footballer who plays as a defender for Premier League club Crystal Palace. His natural position is right-back but he can also play at left-back, centre-back, and in midfield.

Ward operated mainly as a central defender at the start of his professional career. He proved his versatility in the 2010–11 season with Steve Cotterill deploying him as a right-back at the start of the season, and also played him as a central midfielder, right midfielder and as an attacking midfielder.[35] Whilst at Palace, he has often filled in at left back, most notably in the 2013–14 and 2014–15 seasons.

Ward is currently involved with helping and supporting local charity Faith and Football, which was set up by former Pompey defender Linvoy Primus. He attended the Bourne Community College in Southbourne and Bishop Luffa School in Chichester. Ward is a Christian and kneels down on the pitch to pray before each match. On 20 April 2014, Ward returned to his home church for an interview about how he brings his Christian faith to his job as a footballer. He currently resides in London.

Ward started his footballing career with local youth team East Lodge F.C. and signed a professional contract with Portsmouth in July 2008 after spending two years in the Academy and Reserves.

On 28 May 2012, Ward completed his move to Crystal Palace for £400,000 on a four-year deal. He made his debut on 14 August 2012, in a 2–1 win against Exeter City in the League Cup. He made his league debut four days later in a home game against Watford. He won promotion with Crystal Palace after clearing a shot off the line during the last minute of injury time against the same opponents in the 2013 Championship play-off final. Ward scored his first goal for Crystal Palace in a 3–1 home win against Queens Park Rangers on 14 March 2015.