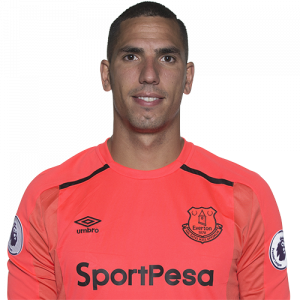 Joel Robles Blázquez (born 17 June 1990) is a Spanish professional footballer who plays as a goalkeeper for Real Betis.

Robles started his professional career at Atlético Madrid, initially in the C team in 2008, before progressing into the B team a year later, before being promoted into the senior squad. He moved on loan to Rayo Vallecano in January 2012, and again a year later to Premier League side Wigan Athletic, where he was part of their 2013 FA Cup Final-winning side before joining Everton.

Robles played internationally for Spain at under-16, under-17, under-21 and under-23 level, and was part of the squad that won the 2013 European Under-21 Championship.

Real Betis
On 5 July 2018, Robles signed a four-year contract with Real Betis. He was first-choice for cup and European matches, while Pau López started league games. As López left for Roma in the next year, he was the first-choice for league matches.