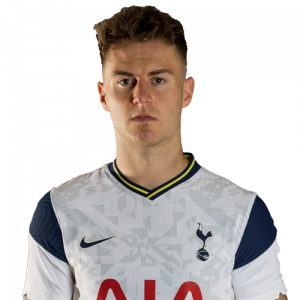 Joseph Peter Rodon (born 22 October 1997) is a Welsh professional footballer who plays as a centre-back for Premier League club Tottenham Hotspur and the Wales national team.

A youth product of Swansea City, Rodon made 54 senior appearances for the club before moving to Tottenham Hotspur in October 2020.

Rodon grew up in Llangyfelach, Swansea, and was a Swansea City season ticket holder before joining the club at the age of eight in 2005. He signed his first professional contract in July 2015 and was named on the first-team bench for the first time in January 2016 for the FA Cup tie with Oxford City.[2] He was then named on the first-team bench in the Premier League game at the Emirates Stadium against Arsenal in October 2017. Rodon played as captain of Swansea’s under-23 team in a 2–1 win over Cheltenham Town in the EFL Trophy on 15 August 2017.

On 30 January 2018, he joined League Two side Cheltenham Town on loan until the end of the 2017–18 season. Manager Gary Johnson said that “we have been keeping an eye on him for some time and he is undoubtedly a quality player”.

Rodon returned to Swansea and was given his senior debut by manager Graham Potter ahead of the 2018–19 Championship season. He became a regular starter at the club and made 21 appearances the following season under new coach Steve Cooper.

Rodon signed for Premier League club Tottenham Hotspur on 16 October 2020 for a fee of around £11 million on a five-year contract. Rodon made his Premier League debut for Tottenham Hotspur on the 26 October 2020 after coming on as a substitute for Son Heung-min in the 93rd minute in the 1–0 win away against Burnley. He made his first start for the club in the away match against Chelsea on 29 November as Toby Alderweireld was out injured, and helped keep a clean sheet in a 0–0 draw.

He was named in a preliminary senior Wales squad in May 2018 for a friendly against Mexico but was left out of the final selection. He was called up for a competitive game for the first time for an August 2019 qualifier against Azerbaijan.