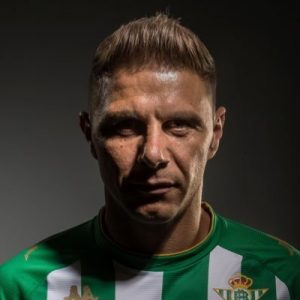 Joaquín Sánchez Rodríguez (born 21 July 1981), known simply as Joaquín, is a Spanish professional footballer who plays for and captains Real Betis as a right winger.

He is well known for his pace and acceleration, as well as excellent dribbling and crossing ability. During his career he was mainly associated with Betis and Valencia, appearing in 579 La Liga matches over 18 seasons and scoring 76 goals. In the competition he also represented Málaga, signing with Fiorentina from Italy in 2013.

Joaquín was capped for Spain on 51 occasions, representing the nation in two World Cups and one European Championship.

Return to Betis
On 31 August 2015, Joaquín returned to Betis by signing a three-year contract. In 2017, he acquired a 2% share in his first club.

Joaquín found the net in a 1–1 draw against Getafe CF on 15 September 2019, marking his 400th appearance for the green-and-whites – he also drew level with Julio Cardeñosa as the player with most Spanish top-tier appearances for Betis with 307. On 8 December, he scored an 18-minute hat-trick (the first of his long career) in a 3–2 home win over Athletic Bilbao, becoming the oldest player ever to achieve the feat in La Liga at the age of 38 years and 140 days, breaking the previous record of 37 years set by Alfredo Di Stéfano in 1964. At the end of the year, he agreed to an extension until 2021.

On 16 July 2020, in a 2–1 home loss to Deportivo Alavés, Joaquín made his 551st Spanish top division appearance, thereby surpassing Raúl as the outfield player with the most games in the competition. Only goalkeeper Andoni Zubizarreta remained ahead of him, on 622.