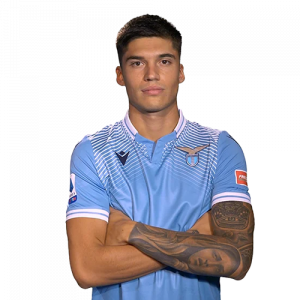 Carlos Joaquín Correa (born 13 August 1994) is an Argentine professional footballer who plays as a forward for Serie A club Lazio and the Argentina national team.

Born in Juan Bautista Alberdi, Tucumán, Correa represented River Plate, Renato Cesarini and Estudiantes as a youth. He made his first team debut with the latter on 19 May 2012, coming on for Duván Zapata in a 0–3 away win against Banfield for the Primera División championship.

Correa scored his first professional goal on 10 May 2014, netting the first in a 3–0 home win against San Lorenzo. He also featured regularly for the side during the year’s Copa Sudamericana, scoring in a 2–1 home win against Peñarol on 15 October.

Sampdoria
On 16 December 2014, Correa transferred to Serie A club Sampdoria for a US$10 million fee. He signed a four-and-a-half-year contract the following 9 January, receiving the number 8 shirt.

Correa made his debut for Samp on 15 February 2015, starting in a 1–2 loss at Chievo. Rarely used during his first season, he switched his number to 10 ahead of the 2015–16 campaign, and started to feature more regularly.

Correa scored his first goal abroad on 17 January 2016 in a 1–2 loss at Carpi. In the following two matchdays, he scored back-to-back goals against Napoli (2–4 home loss) and Bologna (2–3 away loss), and finished the season with three goals as his side achieved a disappointing 15th place.

Sevilla
On 10 July 2016, Spanish La Liga side Sevilla reached an agreement with Sampdoria for the transfer of Correa for a rumoured €13 million fee. Presented by the club two days later, he made his debut for the club on 17 August, starting in a 0–3 away loss against Barcelona for the second leg of the 2016 Supercopa de España.

Correa made his debut in the main category of Spanish football on 20 August 2016, replacing compatriot Luciano Vietto in a 6–4 home win against Espanyol. On 22 February 2017, he scored his first UEFA Champions League goal in a 2–1 win over Leicester City in the 2016–17 UEFA Champions League round of 16.

Lazio
On 1 August 2018, El Tucu Correa returned to Italy to join Lazio on a five-year contract for a €16 million transfer fee.