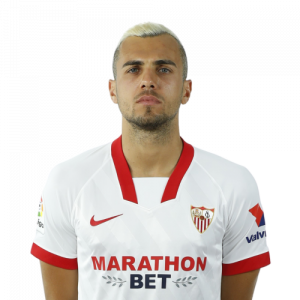 Joan Jordán Moreno (born 6 July 1994) is a Spanish professional footballer who plays for Sevilla FC as a central midfielder.

Born in Regencós, Girona, Catalonia, Jordán joined RCD Espanyol’s youth system in 2011 at the age of 17, after a stint with lowly UD Poblense. He made his senior debut for the reserves in the 2012–13 season in Segunda División B, becoming a regular starter afterwards.

On 21 August 2014, Jordán signed a new five-year contract with the club, being definitely promoted to the first team. Nine days later he made his competitive – and La Liga – debut, coming on as a substitute for Abraham in the 70th minute of a 1–2 home loss against Sevilla FC.

Jordán scored his first goal in the top flight on 10 January 2016, but in a 1–2 defeat at SD Eibar. On 26 July, he was loaned to Segunda División side Real Valladolid for one year.

On 13 July 2017, Jordán joined Eibar on a three-year deal. In his first season, he contributed with six goals and four assists to a final ninth place in the top tier.