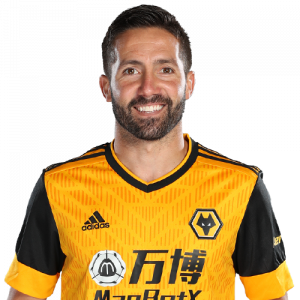 João Filipe Iria Santos Moutinho (born 8 September 1986) is a Portuguese footballer who plays for Premier League club Wolverhampton Wanderers and the Portugal national team. Mainly a central midfielder, he can also operate as a defensive or attacking midfielder and on either flank.

He began his professional career with Sporting, moving in 2010 to Porto and winning 12 major titles between the two clubs combined. Three years later he transferred to Monaco for €25 million, conquering the Ligue 1 championship in the 2016–17 season; in 2018, he joined Wolverhampton Wanderers.

Moutinho represented the Portuguese national team at three European Championships, two World Cups and one UEFA Nations League finals, winning the 2016 and 2019 editions of each of the former two.

On 24 July 2018, Moutinho joined newly-promoted English club Wolverhampton Wanderers on a two-year-deal for an undisclosed fee, reported to be around £5 million. He made his Premier League debut on 11 August, featuring 85 minutes in a 2–2 home draw against Everton. His first goal in the competition arrived on 22 September, when he scored from just outside the box with his weaker left foot in a 1–1 draw away to Manchester United.

On 14 May 2019, Wolverhampton fans voted Moutinho as Player of the Season. He played all thirty-eight league fixtures in the process, adding six appearances in their semi-final run in the FA Cup, the first since 1997–98.

On 23 November 2019, shortly after Moutinho had scored his team’s opening goal in a 2–1 league win away to Bournemouth, his second in the competition, it was announced that the player had signed a new contract with the club keeping him at Molineux until 2022.

On 12 December 2020, Moutinho was sent off for a second yellow card in a 1–0 home loss to West Midlands neighbours Aston Villa. It was his first red card in 859 career matches.

Moutinho scored his debut goal at Molineux, and the third of his Wolves career, from 30 yards against Arsenal in a 2–1 win in the Premier League on 2 February 2021. This match-winning goal ensured Wolves did the league double over Arsenal in 2020–21 for the first time since 1978–79.