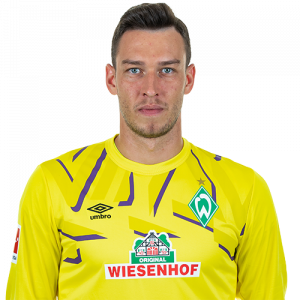 Jiří Pavlenka (born 14 April 1992) is a Czech professional footballer who plays as a goalkeeper for Werder Bremen.

Slavia Prague
Pavlenka joined Slavia Prague from Baník Ostrava in January 2016 for a transfer fee of €380,000. He won the league title with Slavia Prague in the 2016–17 Czech First League season.

Werder Bremen
In June 2017, Pavlenka joined Werder Bremen signing a three-year contract with the option of a fourth year. The transfer fee was estimated at €3 million.

In August 2018, following a strong debut season in the Bundesliga, Pavlenka agreed a contract extension with the club.

International career
Pavlenka has played international football at under-21 level for his country.

He got his first call up to the senior Czech Republic side for a friendly against Slovakia in March 2015. He made his debut for the senior side on 15 November 2016 in a friendly match against Denmark.