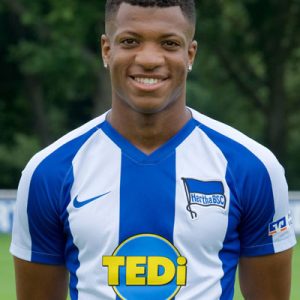 Ngankam Jessic Gaïtan Ngankam (born 20 July 2000) is a German footballer who plays as a forward for Hertha BSC.

Club career
Ngankam made his professional debut for Hertha BSC on 16 May 2020 in the Bundesliga, coming on as a substitute in the 79th minute for Vedad Ibišević in the away match against 1899 Hoffenheim, which finished as a 3–0 win.

International career
Ngankam was included in Germany’s squad for the 2017 FIFA U-17 World Cup in India. He made four appearances during the tournament, in which Germany were eliminated in the quarter-finals with a 1–2 loss against Brazil. The following year, he made three appearances for the under-18 national team.

Personal life
Ngankam was born in Berlin, and is of Cameroonian descent. His brother Roussel is also a footballer, and appeared for the Germany youth national teams.