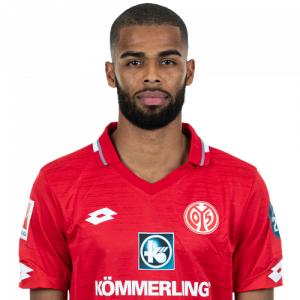 Jeremiah St. Juste (born 19 October 1996) is a Dutch professional footballer who plays as a centre back for 1. FSV Mainz 05 in the Bundesliga.

St. Juste was born in Groningen to a Dutch mother and a Kittian father. He grew up with three siblings. Benjamin is a former SC Heerenveen and FC Groningen youth player, plays futsal for VV Pelikaan, Yoshua, plays Futsal for the Netherlands national futsal team. Sister Naomi works as a fashion model and television actress in the Netherlands.

Club career
Early career
St. Juste started his career for SV Marum. In summer 2007 he joined to Jong Heerenveen. He made his Eredivisie debut on 24 January 2015 against SBV Vitesse. He replaced Joost van Aken in injury time in a 4–1 home win.

Feyenoord
St. Juste moved to Feyenoord on 18 July 2017 on a four-year deal. He made his debut for that club on 9 September 2017 in a match against Heracles Almelo.

Mainz 05
On 7 August 2019, Feyenoord announced on their website St. Juste was moving to Mainz on a four-year contract for an undisclosed fee.