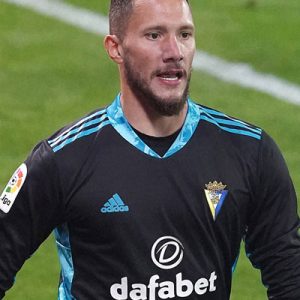 Jeremías Conan Ledesma (born 13 February 1993) is an Argentine professional footballer who plays as a goalkeeper for Spanish club Cádiz, on loan from Rosario Central.

Ledesma had a spell in the ranks of Racing Club de Pergamino, which preceded a move to Rosario Central in 2006. He first appeared in the club’s first-team squad in June 2013 when he was an unused substitute for Primera B Nacional matches versus Instituto and Deportivo Merlo. However, it took Ledesma almost five further seasons to make his professional debut. It eventually arrived on 25 April 2017 during a Copa Argentina game with Cañuelas, he played the full duration of a 1–0 win. Six months later, in October, he made his domestic league bow in the Argentine Primera División versus Tigre.

On 25 August 2020, Ledesma moved abroad for the first time in his career, after agreeing to a one-year loan deal with La Liga newcomers Cádiz. His first appearance came in an away win against Athletic Bilbao on 1 October. His 100th career match arrived on 29 December in a goalless draw with Valladolid.