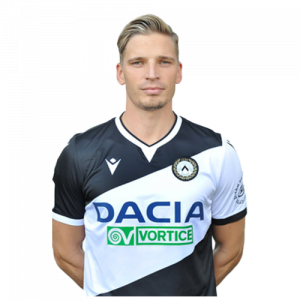 Jens Stryger Larsen (born 21 February 1991) is a Danish footballer who currently plays as a defender for Serie A club Udinese and the Denmark national team.

Brøndby
Stryger Larsen made his debut for Brøndby IF starting against FC Nordsjælland in November 2009 before being replaced by Jan Kristiansen after an hour. During his time at Brøndby, he quickly became very popular among Brøndby supporters because of his energy, and in the end of the 2009–2010 season and at the beginning of the 2010–2011 season he featured regularly in Brøndby’s team, keeping players such as Sweden international Alexander Farnerud on the bench. In August 2010 he was named as one of the greatest talents in Denmark by the Danish media, and at 23 September, Danish football magazine Tipsbladet reported interest in him from Serie A club Genoa.

FC Nordsjælland
On 9 July 2013, Stryger Larsen joined division rivals FC Nordsjælland on a free transfer, signing a three-year deal. He was a regular during his time in Nordsjælland, playing 30 matches in the Superliga during the 2013–14 season.

Austria Wien
On 18 June 2014, Stryger Larsen was signed by Austrian Football Bundesliga side Austria Wien on a four-year deal. He made his debut for the club on the first day of the 2014–15 season in a match against SV Grödig.

Udinese
On 24 August 2017, Stryger Larsen joined Italian Serie A club Udinese on a four-year contract. He scored his first goal for I Bianconeri on 27 September against Roma. He soon grew out to become a first team regular at Udinese.

On 19 January 2020, Stryger Larsen scored and assisted in a 3–2 loss against Milan, his goal being scored from a tight angle after a poor clearance by Milan-goalkeeper Gianluigi Donnarumma.