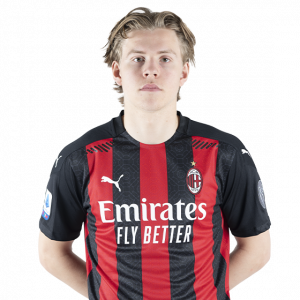 Jens Petter Hauge (born 12 October 1999) is a Norwegian professional footballer who plays as a winger for Italian Serie A club Milan and the Norway national team.

Bodø/Glimt
Born in Bodø, Nordland, and progressing through the youth academy of Bodø/Glimt, Hauge signed his first professional contract with the club on 12 April 2016. The following day he made his senior debut in a 6–0 cup win against IF Fløya as a 64th minute substitute for Fitim Azemi. He immediately scored a hat-trick. Hauge made his league debut on 23 April against Strømsgodset where he came on as a late substitute as Bodø/Glimt lost 2–0. In the next league games he featured regularly, and on 8 July he scored his first top-flight goal in the 4–1 away win over IK Start, becoming Bodø/Glimt’s youngest ever goalscorer in the Eliteserien. In the 2016 season, he made 20 league appearances in which he scored one goal, as Bodø/Glimt suffered relegation to the second-tier Norwegian First Division.