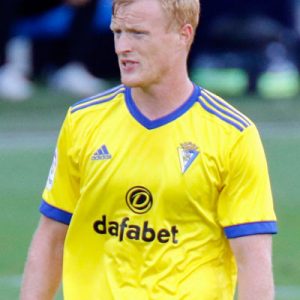 Born in Aarhus, Denmark, Jønsson moved up to local team AGF’s first team in summer 2011. Prior to that he was playing for the IF Lyseng. On 10 December 2012, Jønsson scored a goal for the final result of 3–3 against Silkeborg IF in the last minute of the last match of 2012 in the Danish Superliga. This goal was later awarded “Best Goal of 2012” by the viewers of DR award show “Sport 2012”.

On 26 August 2016, he signed a three-year contract with the Turkish Süper Lig club Konyaspor. With Konyaspor he won the Turkish Cup and Super Cup in 2017. At the European level, he was utilised in four group matches of the 2016–17 and 2017–18 UEFA Europa League. Konyaspor was eliminated after the group stage each year.

On 25 August 2020, Jønsson signed a two-year deal with the newly promoted La Liga side Cádiz CF.