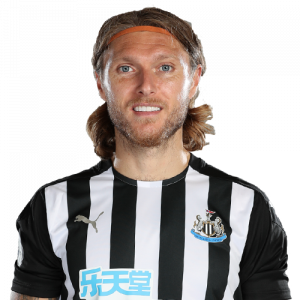 Jeffrey Patrick Hendrick (born 31 January 1992) is an Irish professional footballer who plays as a midfielder for Premier League club Newcastle United and the Republic of Ireland national team.

Hendrick spent his childhood years with boyhood club St. Kevin’s Boys in his native Dublin. He had a number of unsuccessful trials in England before joining Derby County’s youth academy in 2008. He made his professional debut in April 2011 after impressive performances with the reserve team led manager Nigel Clough to include him in the senior setup. He quickly became a regular starter and appeared in the 2014 Championship play-off final where Derby missed out on promotion with a 1–0 loss to Queens Park Rangers. He amassed a total of 214 appearances and 26 goals for Derby over six years.

Hendrick joined newly-promoted Premier League side, Burnley, in August 2016, signing a three-year deal. He was part of the team that finished in seventh place in the 2017–18 season which saw them qualify for the second qualifying round of the following season’s Europa League. This was Burnley’s first taste of European football in 51 years. Hendrick left Burnley in June 2020 after racking up 139 appearances and 10 goals in four seasons. He joined fellow Premier League club Newcastle United in a free transfer on a four-year deal in August 2020.

Hendrick has represented Ireland at all youth levels. Since his senior international debut in 2013, he has made 60 appearances for Ireland and represented them at Euro 2016.