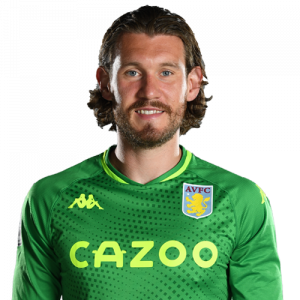 Steer joined Villa from his hometown club Norwich City on 1 July 2013, after beginning his playing career with the Canaries. He has also played on loan for Yeovil Town, Cambridge United, Doncaster Rovers and Charlton Athletic, as well as England at under-16, under-17 and under-19 level.

Jed Steer was recalled to cover for Villa’s new signing Lovre Kalinić after Orjan Nyland was injured, but following an injury to Kalinic during a match against West Brom, Steer was subbed on at halftime. He then started the following match against Stoke City, and his impressive performance meant that he continued to play the next match against Derby, despite Kalinic returning from injury, before retaining his place in Villa’s following match, the Second City Derby against Birmingham City. Steer’s good performances continued, and he quickly became first-choice keeper for Dean Smith, which saw Steer become part of a record-breaking ten-league-game winning streak for Aston Villa. Steer starred in Aston Villa’s Championship play-offs semi-final win against West Bromwich Albion, saving two penalties from Mason Holgate and Ahmed Hegazi in a 4–3 shoot-out win to help send Aston Villa to the play-off finals for a second consecutive year.

Steer made his youth international début in October 2007 and he enjoyed a good start for the England U16s as his side lifted the Sky Sports Victory Shield, and were champions of the Montaigu Tournament in which Steer produced the matchwinning penalty save.

In August 2008, he was called up for the England U17, aged 15, for friendly matches against Italy, Portugal and Israel. He made his England U17 debut against Armenia in October 2008. They went on to qualify for the UEFA European Under-17 Football Championship but very much under achieved and failed to qualify for the FIFA U-17 World Cup.

Steer made his England U19 debut against Cyprus in October 2010, keeping a clean sheet and saving a penalty in the process.