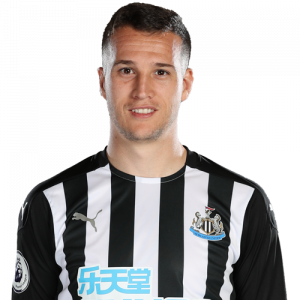 Javier Manquillo Gaitán ( born 5 May 1994) is a Spanish professional footballer who plays as a right back for Premier League club Newcastle United.

Born in Madrid, Manquillo started playing football with hometown’s Real Madrid alongside his twin brother Víctor, a forward. However, in mid-2007, the club decided to release the latter and the former followed suit, with both signing for neighbouring Atlético Madrid 48 hours later. In November 2011 he made his unofficial debut with first team, playing in a friendly game against Zamalek SC; late into the month, he extended his contract until 2016.

On 21 July 2017, Manquillo signed for Premier League club Newcastle United on a three-year contract for an undisclosed fee.

Manquillo earned 25 caps for Spain at youth level, including seven for the under-21s. He made his debut on 4 September 2014, starting in a 1–0 win in Hungary for the 2015 UEFA European Under-21 Championship qualifiers.