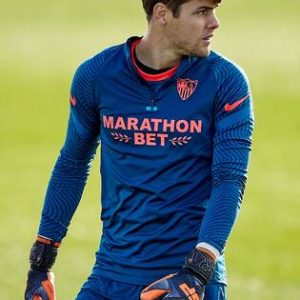 Javier “Javi” Díaz Sánchez (born 15 May 1997) is a Spanish professional footballer who plays for Sevilla FC as a goalkeeper.

Born in Mairena del Aljarafe, Seville, Andalusia, Díaz represented Sevilla FC as a youth. He made his senior debut with the C-team on 3 April 2016, starting in a 0–1 Tercera División away loss against CD Cabecense.

Ahead of the 2018–19 season, Díaz was promoted to the reserves in Segunda División B. He made his first team – and La Liga – debut on 31 March 2019, starting in a 0–1 home loss against Valencia CF as starter Tomáš Vaclík was injured and backup Juan Soriano was suspended.