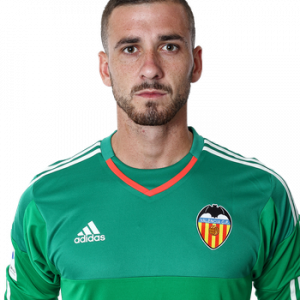 Jaume Doménech Sánchez (born 5 November 1990) is a Spanish professional footballer who plays for Valencia CF as a goalkeeper.

Born in Almenara, Castellón, Valencian Community, Doménech played youth football with Villarreal CF. He played for the C team after being loaned to CD Onda for one year.

In the summer of 2013, after brief spells with CD El Palo and Huracán Valencia CF, Doménech signed for Valencia CF, and was assigned to the reserves in Segunda División B. In both of his seasons, the side narrowly avoided relegation with him as first choice.

Doménech was promoted to the main squad for the 2015–16 campaign by manager Nuno Espírito Santo. On 12 September, profiting from injuries to both Diego Alves and Mathew Ryan, he played his first match in La Liga, a 1–0 away win against Sporting de Gijón where he put in a player of the match performance. The following day, the club announced he had renewed his contract until 2018.

Doménech was backup to another Brazilian, Neto, in 2017–18. He started in the team’s semi-final run in the Copa del Rey, notably saving two penalties in the shootout against Deportivo Alavés in the quarter-finals. In the following edition of the tournament he appeared in every game for the winners, including the 2–1 victory over FC Barcelona in the final.