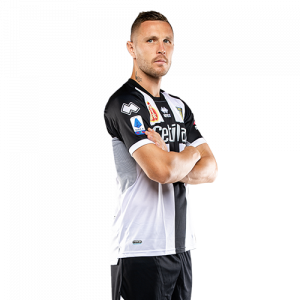 Jasmin Kurtić (born 10 January 1989) is a Slovenian professional footballer who plays as a midfielder for Parma and the Slovenian national team.

On 12 January 2011, Kurtić made his Palermo debut in the Coppa Italia round of 16 game against Chievo; the match ended in a 1–0 win for Palermo. On 13 February 2011, Kurtić made his debut in Serie A, playing the whole 90 minutes against Fiorentina. On 10 April 2011, Kurtić scored his first goal in Serie A for Palermo against Cesena.
assuolo, Torino and loan to Fiorentina
On 1 July 2013, Kurtić moved to Sassuolo in a co-ownership deal. He made his Sassuolo debut in the third round of Coppa Italia away to Novara on 17 August 2013, as a starter.

On 30 January 2014, he moved to Torino on loan, also at the decision of Palermo, who owned half of his player rights. He scored his first goal for Torino on 19 April 2014 in the 34th round away to Lazio (3–3). During the season, Kurtić collected 16 appearances and scored two goals in the league.

On 20 June 2014, his co-ownership agreement between Palermo and Sassuolo was resolved in favour of Sassuolo.

On 1 September 2014, he moved on loan to Fiorentina. He made his debut on 18 September in the UEFA Europa League match against Guingamp, and scored his first goal on 21 September against Atalanta.
Atalanta
On 25 June 2015, Kurtić was signed by Atalanta.