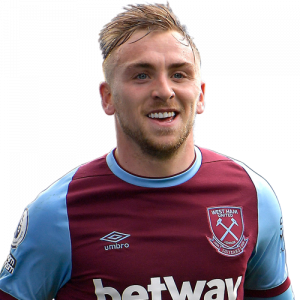 Jarrod Bowen (born 20 December 1996) is an English professional footballer who plays as a forward for Premier League club West Ham United. He has previously played for Hereford United and Hull City.

Bowen was born in Leominster, Herefordshire. Growing up, his idol was David Beckham and he supported Manchester United.

Bowen has been compared to former Bayern Munich legend Arjen Robben through his footballing talent, with sports journalist Daniel Emery stating, “He is a budget Arjen Robben in the way that he plays. Championship defenders know exactly what he is going to do, but they simply cannot stop it. He gets the ball on the channel on the right and looks to cut inside onto his left foot and find the far corner. Despite it being his trademark move, defenders still struggle to prevent him from getting his shot off. Would Premier League defenders stifle him? It remains to be seen.”

On 31 January 2020, Bowen joined West Ham United on a permanent transfer, with the Premier League club paying an initial £18 million for the forward, with up to £7 million in potential add-ons. On 29 February 2020, in his first start for West Ham, Bowen scored his first goal for the club, in a 3–1 win against Southampton.