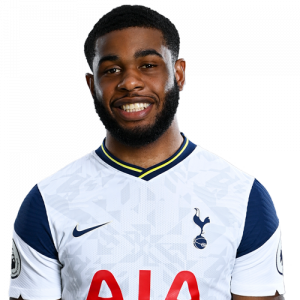 Tanganga was born in Hackney, Greater London, to a Congolese family. He went on to attend Greig City Academy and at the age of 10 joined the Tottenham Hotspur youth academy.

In June 2019 Tanganga had his contract with Tottenham extended until 2020. On 24 September 2019, he made his debut in the EFL Cup away to Colchester United. On 11 January 2020, Tanganga made his full Premier League debut in a 1-0 home defeat against Liverpool. Three days later he played the full 90 minutes against Middlesbrough in a FA Cup replay, which Spurs won 2–1 and was named man of the match.

On 27 July 2020, Tanganga signed a new contract with Tottenham, valid until 2025. However, he suffered from a series of injuries, and apart from a League Cup game against Chelsea in September, did not play any games from March 2020 when League football was suspended due to the COVID-19 pandemic until 26 November 2020 in the UEFA Europa League match against Ludogorets Razgrad.

In 2014, Tanganga represented the England under-16 team against Scotland in the Victory Shield. In 2017, he took part in the Toulon Tournament and was a second-half substitute in the final as England defeated Ivory Coast to retain their title.

Tanganga also played at the 2018 UEFA European Under-19 Championship and scored in their opening group game against Turkey.

On 2 October 2020, Tanganga received his first call up to the England U21 squad but withdrew on 5 October 2020 due to injury.