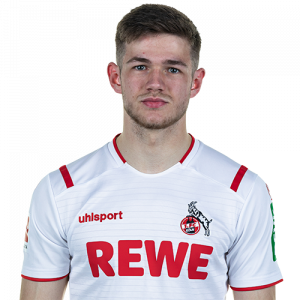 Jan Thielmann (born 26 May 2002) is a German professional footballer who plays as a right winger for 1. FC Köln.

In his youth years, Thielmann first played in the then youth game community Hetzerath / Föhren / Bekond and switched to the youth team of Eintracht Trier for the 2014–15 season. For the 2017–18 season, he moved to the U17s of 1. FC Köln. He played 24 games for the team and won the championship with them in June 2019 after a 3–2 win over Borussia Dortmund.

In the 2019–20 season, the winger was promoted to the U19s. Thielmann made his professional debut with 1. FC Köln in a 2–0 Bundesliga win over Bayer 04 Leverkusen on 14 December 2019. In doing so, he became the first footballer born in 2002 to play in the Bundesliga, and was the second youngest league debutant for 1. FC Köln after Yann Aurel Bisseck.

Because he was convincing in this game, coach Markus Gisdol brought him in from the start in the subsequent games against Eintracht Frankfurt and Werder Bremen.[5] In January 2020, Thielmann signed his first professional contract. The collaboration between him and 1. FC Köln was extended until 30 June 2022. “He is very, very advanced for his age, both physically and physically, and he also has a very good understanding of the game. We trust him that he will hold his ground in the long term,” said sports director Horst Heldt, justifying the contract extension with the young player.

On 5 December 2020, Thielmann scored his first goal as a professional in a 2–2 draw against VfL Wolfsburg. On January 20, 2021 he scored an injury time winner against schalke 04 in a relegation six-pointer.