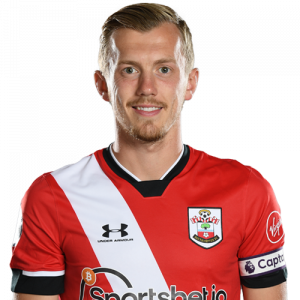 James Michael Edward Ward-Prowse (born 1 November 1994) is an English professional footballer who plays as a defensive midfielder for Premier League club Southampton, whom he captains, and the England national team.

Originally a member of Southampton’s youth system, Ward-Prowse made his first-team debut for the club in October 2011, and signed his first professional contract in May 2012. He became a regular for Southampton, and was appointed as captain in June 2020. In January 2021, he played his 300th game for the club.

He has represented England at under-17, under-19 and under-20 levels and earned 31 caps and scored 6 goals at under-21 level, also serving as captain. He made his senior international debut in March 2017 in a 1–0 away defeat to then World champions Germany.

Ward-Prowse joined the Southampton Academy at the age of eight, later featuring in every match for the under-18 team in the 2010–11 season before becoming a full-time scholar in 2011. While at the Southampton academy, he secretly trained with non-league Havant & Waterlooville in order to “toughen” himself.