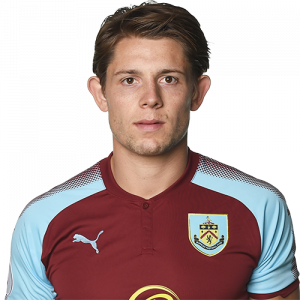 James Alan Tarkowski (born 19 November 1992) is an English professional footballer who plays as a centre back for Premier League club Burnley and the England national team.

He began his professional career at Oldham Athletic of League One, where he made 89 appearances across all competitions. In January 2014, he moved to Brentford for an undisclosed fee, winning promotion to the Championship in his first season. Two years later he signed for Burnley. He made his debut for England in March 2018, starting in a 1–1 draw against Italy.

On 1 February 2016, Tarkowski signed a three-and-a-half-year contract with Championship club Burnley for an undisclosed fee. Tarkowski made his club debut on 20 February against Rotherham United, entering as a substitute in the first half for Michael Keane, who was forced off with a head injury. Tarkowski deputised for Keane for the next two games, with Burnley victorious against Nottingham Forest and Bolton Wanderers. However, Keane was preferred by manager Sean Dyche at right centre-back upon his return to fitness as Tarkowski was limited to one substitution appearance the rest of the season. In third position in the table at the time of Tarkowski’s signing, Burnley went unbeaten the rest of the season as they won their third ever second-tier title and direct promotion to the Premier League on their first attempt.

Tarkowski was handed the captain’s armband for Burnley’s 1–0 extra-time defeat to fourth-tier Accrington Stanley in the EFL Cup on 24 August, after Dyche had made 10 changes to the team that upset Liverpool four days prior. Tarkowski made his Premier League debut on 27 August at Chelsea, coming on as a substitute and receiving a booking for a foul in the run-up to Chelsea’s final goal in the 3–0 defeat. Unable to crack the preferred centre-back partnership of Keane and Ben Mee, Tarkowski received scant playing time, despite being an ever-present on the bench. He was a halftime substitution on 23 April 2017 against Manchester United for Mee, who left with a shin injury, opening the door for his first Premier League start on 29 April against Crystal Palace. Tarkowski endured being hit by an object thrown by a Palace fan during celebrations of Ashley Barnes’ opening goal en route to a clean sheet. Manager Dyche lauded his performance as “outstanding”. Tarkowski would retain his place in the team for Burnley’s final four fixtures, during which Burnley ensured their participation in the next edition.

During the summer transfer window, teammate Michael Keane departed for Everton, allowing Tarkowski to line up with Mee in the center of Burnley’s defence on a full-time basis. Assigned the shirt number 26 initially, Tarkowski assumed the number 5 shirt vacated by Keane ahead of the season. Tarkowski’s performance against Crystal Palace on 10 September was deemed Man of the Match worthy by Sky Sports, as Tarkowski held Benteke and Palace without a goal. His 17 clearances in the match were the most by anyone in the Premier League that season, besting a mark previously held by himself in Burnley’s surprise opening day victory over Chelsea.