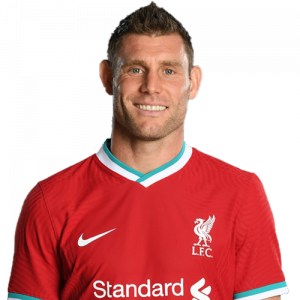 James Philip Milner (born 4 January 1986) is an English professional footballer who plays for Premier League club Liverpool. A versatile player, he has been used in multiple positions, including on the wing, in midfield and at full-back. Milner is Liverpool’s vice-captain.

Milner’s talent in football, cricket, and long-distance running was recognised at a young age. He represented his school in these sports and played football for amateur teams from Rawdon and Horsforth. He supported Leeds United from a young age and was a season ticket holder at the club. In 1996, he joined the Leeds Youth Academy. He made his debut for the first team in 2002 aged only 16 and gained prominence as the youngest player to score in the Premier League, and later spent time on loan at Swindon Town to gain further first-team experience. After Leeds United were relegated at the end of the 2003–04 season, Milner was sold to Newcastle United.

Milner went on to make over 100 appearances for Newcastle United, winning the UEFA Intertoto Cup in 2006, and spent a year on loan at Aston Villa, before signing for Aston Villa permanently in 2008. After winning the PFA Young Player of the Year in 2010, Milner was signed by Manchester City, and went on to win two Premier Leagues, one FA Cup, one EFL Cup and one FA Community Shield. In 2015, Milner signed for Liverpool on a free transfer, and was appointed vice-captain by new manager Jürgen Klopp. He went on to win the UEFA Champions League in 2019, as well as his third Premier League title, the UEFA Super Cup and the FIFA Club World Cup.

Milner made a record 46 appearances for the England national under-21 football team, playing at the 2007 and 2009 UEFA European Under-21 Championships, finishing as runner-up in the latter. He won 61 caps for the full national team, scoring once against Moldova. He was selected for the 2010 and 2014 FIFA World Cup squads, as well as the 2012 and 2016 UEFA European Championships.