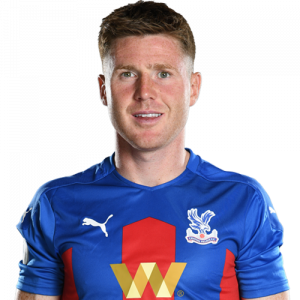 James Patrick McCarthy (born 12 November 1990) is a professional footballer who plays as a central midfielder for Premier League club Crystal Palace and the Irish national team.

McCarthy was born and raised in Glasgow, Scotland. He is the youngest child of Willie and Marie McCarthy, and is a former student of St Margaret Mary’s Secondary School in Castlemilk. He grew up supporting Celtic, and would later try out for their youth teams, but was turned down due to the large number of players the club had already taken on.

McCarthy made over 100 appearances for Hamilton Academical as a teenager, before being transferred to Wigan Athletic in 2009 for an initial £1.2 million which was a record sale fee for Hamilton Academical. After winning the FA Cup with Wigan in 2013, he moved to Everton, suffering from various injuries including a broken leg in 2018 which ruled him out for over a year.

Born and raised in Scotland, McCarthy elected to represent the Republic of Ireland at international level and made his competitive debut for their senior team on 26 March 2011 in a UEFA Euro 2012 qualifier against Macedonia. McCarthy was included in the Irish squad at UEFA Euro 2016.