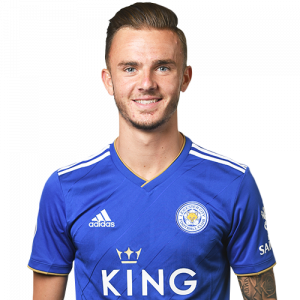 Maddison began his career with Coventry City before joining Norwich City in 2016. He spent the 2016–17 season on loan at Scottish Premiership club Aberdeen. In his first season back at Norwich, Maddison was named in the Championship PFA Team of the Year and EFL Team of the Season. He joined Premier League club Leicester City in 2018.

Maddison made his England under-21 debut in the 2019 UEFA European Under-21 Championship qualification and was called up to the senior team in 2019.

Coventry City
Maddison joined Coventry City’s youth team, and was included in the first-team squad in the 2013–14 season, though did not make an appearance. He made his debut in August 2014, coming on as a substitute in a 2–1 League Cup defeat to Cardiff City. Maddison made his league debut, again as a substitute, in a 3–1 home loss against Bristol City and his first league start in the following game, against Oldham Athletic. He scored his first league goal in the game, with a free-kick in the first-half, as the Sky Blues lost the game 4–1.

In November 2014, Maddison signed his first professional contract, lasting three and a half years, but missed much of the rest of the 2014–15 season after being sent off during a Boxing Day defeat to Doncaster Rovers and then picking up a back injury.

Norwich City
Maddison signed for Premier League club Norwich City on 1 February 2016 on a three-and-a-half-year contract for an undisclosed fee, but was immediately loaned back to Coventry City for the remainder of the 2015–16 season.

On 31 August 2016, Maddison was loaned to Scottish Premiership club Aberdeen for the first part of the 2016–17 season. He made his debut as a substitute against Inverness Caledonian Thistle, then started and scored in the next match in a 3–1 win against Dundee. He followed this with a last-minute winner against Rangers on 25 September 2016.

After returning from his loan spell at Aberdeen, Maddison made his long-awaited league debut for Norwich on 17 April 2017, coming on as a substitute in the second half and scoring in a 3–1 win against Preston North End at Deepdale. Maddison signed a new four-year contract in June 2017. With the arrival of new coach Daniel Farke, Maddison was given regular starts in the team during the 2017–18 season and was named Norwich City’s Player of the Season at the end of the campaign, as well as receiving a nomination for the EFL Championship Young Player of the Season award.

Leicester City
Maddison signed for Premier League club Leicester City on 20 June 2018, on a five-year contract for an undisclosed fee thought to be around £20 million. He scored his first goal in the Premier League on 18 August in a 2–0 win against Wolverhampton Wanderers. He later followed up his impressive start for the club with back-to-back Premier League goals, from set-pieces, against AFC Bournemouth and Huddersfield Town, respectively. On 29 July 2020, it was reported that he agreed a new four-year deal with Leicester City.

On 27 September 2020, Maddison scored a curler outside the box in a 5-2 win against Manchester City in the league which was later voted as Premier League Goal of the Month.