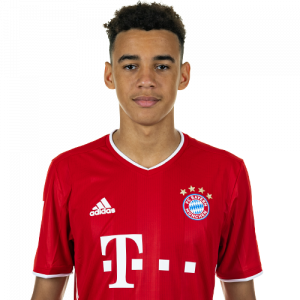 Jamal Musiala (born 26 February 2003) is a German professional footballer who plays as an attacking midfielder for Bundesliga club Bayern Munich and the Germany national team.

Born in Germany to a British-Nigerian father and German mother and raised mainly in England, Musiala represented both Germany and England at youth level, and eventually pledged his allegiance to the Germany national team for future games in February 2021.

In July 2019, aged 16, Musiala left Chelsea to join Bundesliga club Bayern Munich. On 3 June 2020, Musiala made his professional debut, coming on as a substitute for Bayern Munich II in their 3–2 win over Preußen Münster in the 3. Liga. On 20 June 2020, he made his Bundesliga debut against Freiburg, and he became the youngest player to play a match for Bayern in the Bundesliga, aged 17 years and 115 days. On 18 September 2020, Musiala scored his first Bundesliga goal in an 8–0 win over Schalke, to become Bayern’s youngest goalscorer, aged 17 years 205 days, breaking the previous record of Roque Santa Cruz, aged 18 years 12 days.