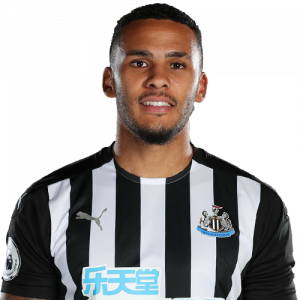 Jamaal Lascelles (born 11 November 1993) is an English professional footballer who plays as a centre-back for Premier League club Newcastle United, where he is captain.

On 9 August 2014, Lascelles signed a contract with Premier League club Newcastle United, joining on the same day as Forest teammate Karl Darlow. As part of the deal, both players were loaned back to Nottingham Forest for the 2014–15 season.

On 4 August 2016, Lascelles was chosen by Benítez to become the new Newcastle United team captain, succeeding the departed Fabricio Coloccini. Benítez had been impressed by Lascelles’ willingness to speak up in the dressing room, in particular his criticism of more senior players in the defeat to Southampton. Despite requiring a double hernia operation, Lascelles played through the pain barrier for the last four months of the 2016–17 season, determined to see the campaign out and ultimately captaining the club to promotion back to the Premier League. His solid performances at the beginning of the 2017–18 season led to him being nominated for the September Premier League Player of the Month award, which was eventually won by Harry Kane. On 6 October 2017, he signed a new six-year contract with Newcastle, keeping him at the club until 2023.