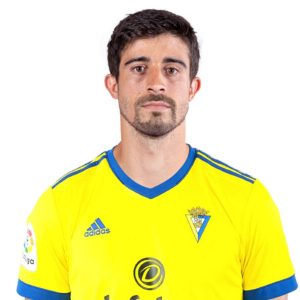 Jairo Izquierdo González (born 22 October 1993), sometimes known as just Jairo, is a Spanish professional footballer who plays for Cádiz CF on loan from Girona FC mainly as a left winger.

Born in Santa Cruz de Tenerife, Canary Islands, Jairo graduated with CD Tenerife’s youth setup. He made his debuts as a senior with the reserves in 2011, in Tercera División.

On 2 July 2014 Jairo signed a new three-year deal with the club, being promoted to the main squad in Segunda División. On 1 September, however, he was loaned to Segunda División B side Real Murcia, in a season-long deal.

On 5 September 2015 Jairo made his professional debut, coming on as a second-half substitute for Omar Perdomo in a 1–1 away draw against SD Huesca. On 17 January 2017, after making no appearances during the campaign, he left the club by mutual consent and joined UD Melilla just hours later.

On 18 August 2018, Jairo signed a four-year contract with Girona FC in La Liga. Eleven days later, he was loaned to second division side Cádiz CF for the season.

Upon returning from loan, Jairo spent the 2019–20 campaign with his parent club, now also in the second division. On 5 October 2020, he returned to Cádiz, again in a one-year loan deal.